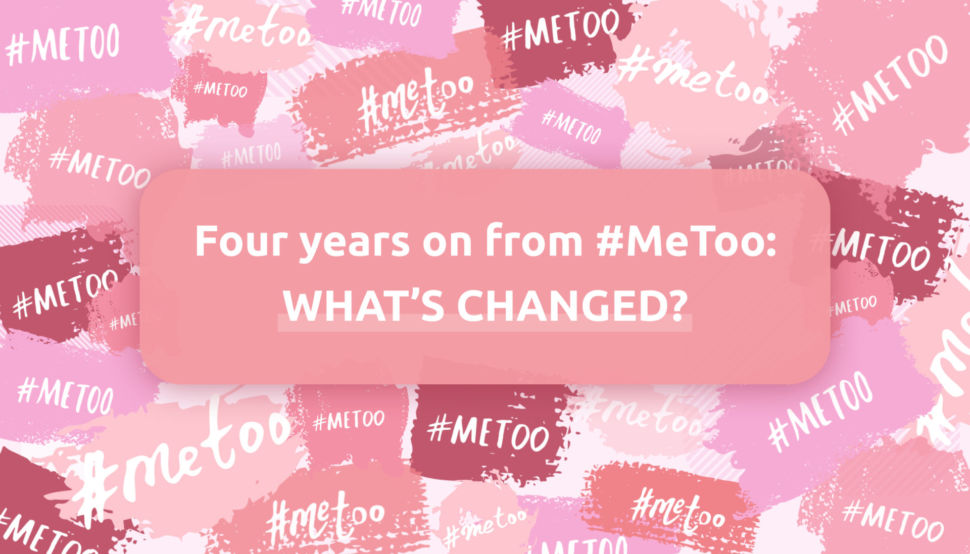 Four years ago, the #MeToo movement was brought to the fore, following allegations against disgraced film mogul Harvey Weinstein. Its mission was to highlight just how often sexual harassment occurs in the workplace. It has certainly done so in a way that statistics and law could never have achieved. If simple awareness was its sole aim, #MeToo has delivered on its promise.

What the movement has done, particularly over the past four years, is highlight how colossal the problem of sexual assault and harassment is. It’s not just celebrities that are coming forward and discussing their experiences; people from almost every industry and in every corner of the globe are now speaking up, which is a crucial change in the way people think about sexual harassment.

The question is: what’s actually changed? What has been done in the wake of #MeToo to help make the workplace a safer place for women

Thanks to the #MeToo movement, the prevalence of sexual harassment can no longer be ignored by businesses. Because of this, a counterculture has emerged, so we’re certainly moving in the right direction.

Businesses and society as a whole are changing – but it remains unclear as to the action-driven differences that have been made. While speaking up is no longer taboo, no one has addressed whether those that speak up are being listened to, or if businesses are responding to incidents of sexual harassment appropriately.

That’s why we commissioned Europe’s largest independent pollster, Norstat, to conduct one of the most comprehensive studies into workplace misconduct ever produced – the Trust Gap. Our aim was to understand the experiences of employees and employers in the UK and US surrounding workplace misconduct in all its forms. This isn’t just limited to sexual harassment, but bullying, discrimination, fraud, and more.

What our research shows is that businesses are still lagging behind and what’s emerged is a clear trust gap. While we’ve moved away from a time of executives blatantly denying the existence of issues within their organization, their approaches still seem like well-choreographed PR opportunities than genuine change that will alter what is a systemic issue on both sides of the Atlantic. In fact, 74% of office workers in the UK have suffered or witnessed some form of misconduct, and sickeningly, a third of those experience it on a monthly basis. When it comes to harassment, almost half of individuals (47%) have been a victim.

Creating a Speak Up culture

‘Me Too’ is still loudly declared by half of the workforce, four years later. Our research painted a clear picture as to why this is the case.

As ethics and integrity finally reach the top table in most corporations, creating a Speak Up culture needs to be first on the agenda. Empowering people to disclose experiences of workplace misconduct is the very first step in tackling this problem, and we need to move away from old-fashioned approaches that don’t address the concerns employees have surrounding speaking up. The second step is addressing reports in an effective, responsible manner.

Our research showed that a lack of reporting stemmed from employees’ fears of being kept anonymous, the damage to their reputation, and not being taken seriously. It appears that companies fall at the very first hurdle when it comes to dealing with this large-scale problem.

A light at the end of the tunnel

While the issue is still hugely prominent, the #MeToo movement has forced a huge shift in mindset and culture. It has moved an issue that was once taboo and regularly brushed under the carpet to center stage, and this can be seen in real-world action.

In the US, several states have banned non-disclosure agreements that cover up sexual harassment, and many victims across the globe are receiving compensation. But so much more needs to be done. Companies must stand up and take responsibility for the safety and well-being of their workforce, utilizing technology to address employee concerns of anonymity and reputational damage. They need to take a proactive, rather than a reactive, approach to the issue.

The population as a whole has a completely different view now of the size and scale of the issue of sexual assault and harassment thanks to #MeToo – the corporate world just needs to catch up.