Why Forced Arbitration and NDAs Work Against Speak-Up Culture 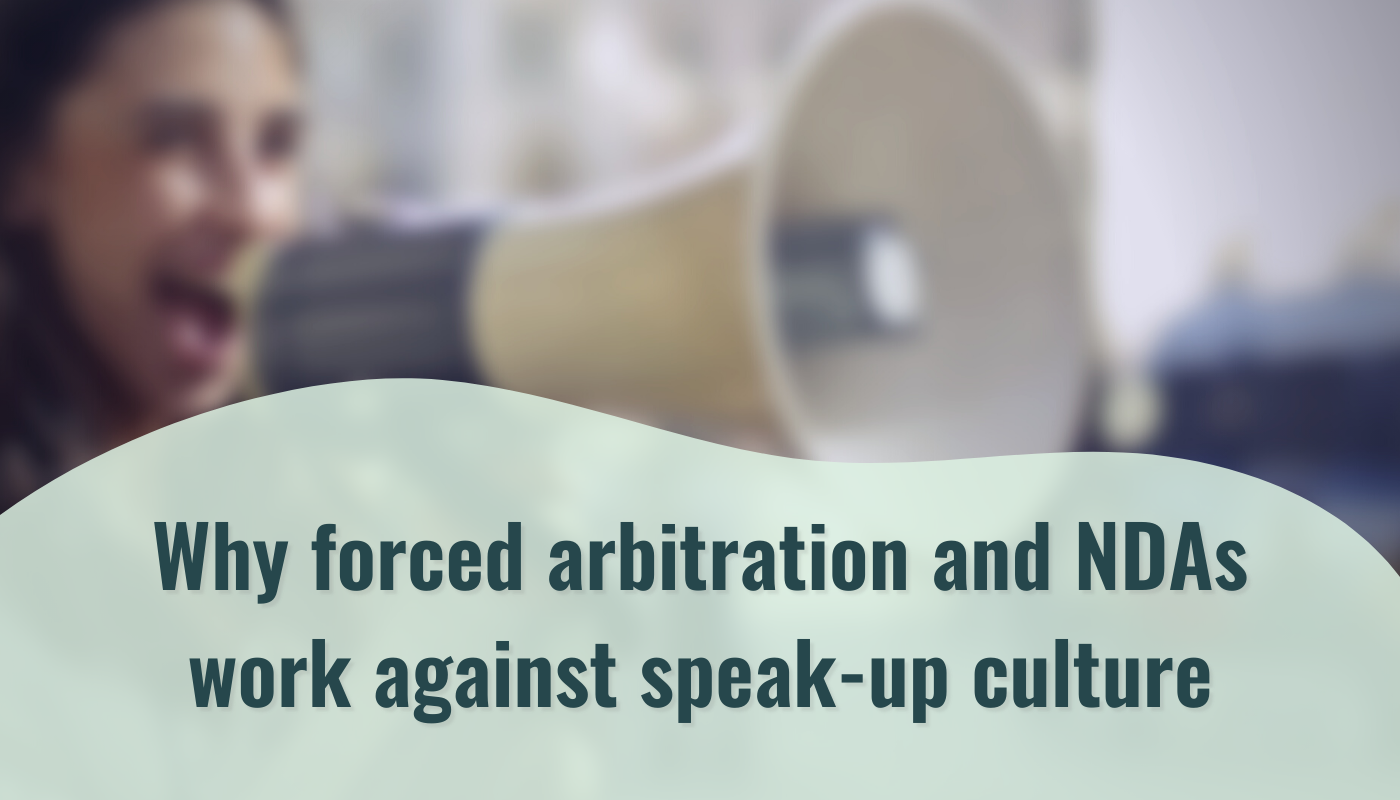 When an organization wants to shield itself from the leaking of confidential information, it may introduce forced arbitration or a non-disclosure agreement (NDA). However, these can easily be misused to bury serious issues of misconduct by silencing employees, particularly when it comes to sexual misconduct.

In this blog post, we explore how the threat of retaliation through the use of forced arbitration and NDAs is actively working against speak-up culture and has no place in the modern workplace.

What is Forced Arbitration?

Forced arbitration is a contractual clause that can prevent judges and arbitrators from addressing the full extent of an organization’s wrongdoing. Individuals are often unknowingly tied to forced arbitration clauses that forfeit their right to go to court if they witness or experience misconduct in the workplace.

What is an NDA?

A non-disclosure agreement (NDA) is a legally binding contract where one party agrees to give another party confidential information about its business or products and the second party agrees not to share this information. While NDAs can be used to protect sensitive information and intellectual property (IP), they can also be misused to prevent details of misconduct from being shared or released to the public by silencing reporters. For example, Harvey Weinstein used NDAs to evade accountability for claims of sexual harassment and assault, while Ifeoma Ozoma was forced to stay silent about discrimination at Pinterest.

On 3rd March 2022, US President Joe Biden signed the historic Ending Forced Arbitration of Sexual Assault and Sexual Harassment Act of 2021 (HR 4445), a bipartisan bill that eliminates the use of forced arbitration to silence reporters of sexual harassment and abuse in the workplace.

There are also laws that attempt to restrict the scope of NDAs, including rules issued by the Securities and Exchange Commission (SEC) and the Defend Trade Secrets Act. However, it’s currently up to each state to determine whether or not to prevent the use of NDAs to silence employees. In California, for example, the Silenced No More Act (SB-331) gives employees the right to talk about workplace discrimination, harassment, or retaliation without breaking their NDAs. Washington’s Silenced No More Act (ESHB 1795) goes one step further by making it unlawful for employers to request that workers sign NDAs or non-disparagement provisions that restrict the employee’s right to talk about workplace discrimination, harassment, retaliation, and more.

Following the introduction of SB-331 in January 2022, many large tech companies have caved to pressure from Investors, lawmakers, employees, and the Transparency in Employment Agreements Coalition to implement similar clauses for all of their employees, not just those based in California. This highlights the growing pressure on businesses to focus on building employee trust rather than relying on forced arbitration and NDAs to silence would-be reporters.

The Importance of #SpeakUp

NDAs were exposed as a tool for sexual predators to hide their behavior during the #MeToo movement, and while some steps have since been taken to limit their use in silencing reporters, there is still much that can be done.

Organizations such as Lift our Voices are actively pushing for further changes at the Federal legislative level, calling for the banning of NDAs and forced arbitration clauses. The wider ambition is to transform the workplace, making it safer and more equitable for everyone.

True speak-up cultures go beyond the legal frameworks and consider reporters as trusted employees looking to protect both the organization and the public. Employees are more willing and able to ask questions and raise concerns about misconduct when they aren’t facing retaliation or legal ramifications of breaking NDAs and forced arbitration clauses.

Our platform can also help organizations effectively deal with reports of potential or actual misconduct, including providing safeguards for confidentiality and anonymity that encourage reporters to report internally first, facilitate getting to resolution efficiently and identify and address risk patterns and trends through analytics.

Discover more about the costs of misconduct and the importance of rebuilding trust with employees in our game-changing Trust gap survey.

Ready to revolutionize misconduct reporting and resolution for your employees? Book a demo today.